First I went to the grand opening of the Ayudando Latinos A Soñar, A Latino Cultural Arts and Social Services Program in Half Moon Bay. I met founder and director Belinda Hernandez-Arriaga, when artist Ellen Silva and therapist Roberta Gelt invited me to work on a mural for the organization. It was a community building effort at the beginning of the Trump election and his blatant discrimination against Mexicans and undocumented immigrants. Today was a special evening because the mural is now in a permanent home on the walls of the ALAS new office. Hurrah!

“Ayudando Latinos A Soñar, A Latino Cultural Arts and Social
Services Program in Half Moon Bay is dedicated to supporting the youth and families of our beautiful coastal community in Northern California
We are proud of the cultural wealth and strength of the families and
children of our community. Every day we witness youth in our program
rise as leaders and soar above with dreams for a future of achievement.” 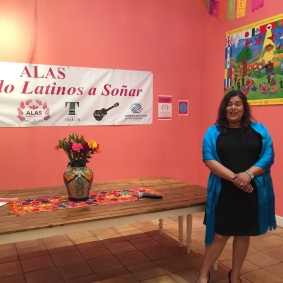 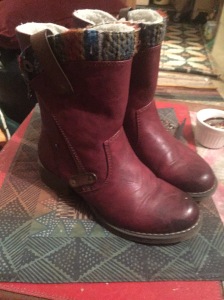 Next I went to the Odd Fellows women’s clothing swap. though I was a bit late, I still got a bag ‘O clothes and some cool boots.

Next door, I stuck my head in to hear the smooth live jazz playing at Cafe Society. Everyone looked blissed out with wine glass in hand.

I circled around to go back to the studio and was welcomed by sounds of piano, trumpet, and sax wafting into the parking lot. It’s not every night that one gets greeted by live music.

Later the musicians walked across Highway One to Tres Amigos to fill their bellies and even remembered to bring me back some food – a chili relleno and some left over beef fajitas. I count my blessings I live in Half Moon Bay on this gentle, pleasant evening.

Thank you to Oakland Museum of California CEO Lori Fogarty for addressing my concerns about the recent interaction with the docent at the Dorothea Lange exhibition. I attended this tour with the Northern California Women’s Caucus for Art who with me witnessed and experienced the unprofessional and insulting docent. Below find the comment Ms. Fogarty posted on my blog
Lori also responded to my personal email to her. She has some ideas we may explore together. I feel confident that the museum will be working to make sure this kind of experience will not happen again.  ~ Judy Shintani 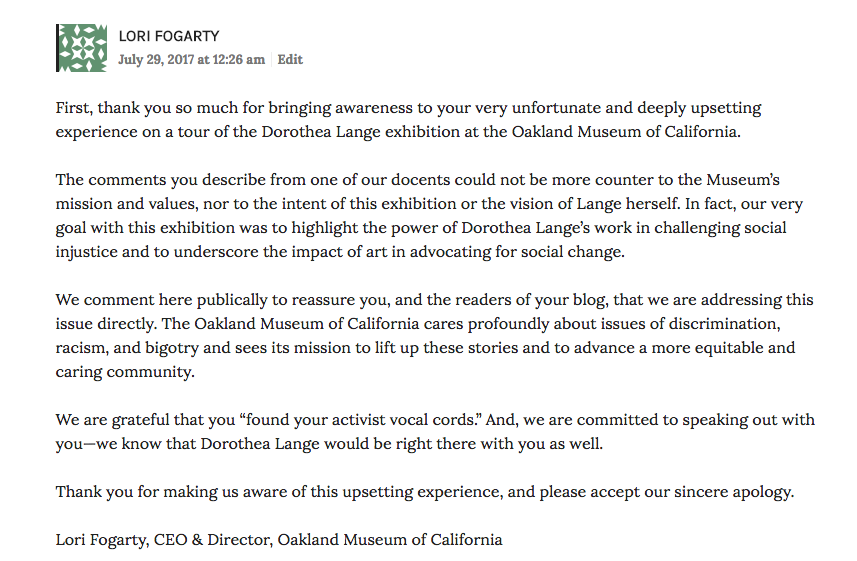 Anyone who has lost his home to a climate of fear has a deep understanding of mankind’s capability for blind betrayal. The father of artist Judy Shintani was an American teenager when he and his family were interned at Tule Lake Incarceration Camp during WWII. Click here to read more. 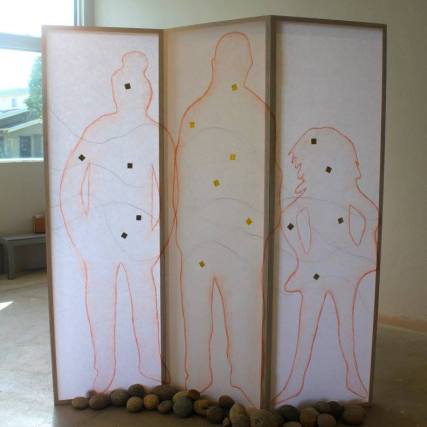 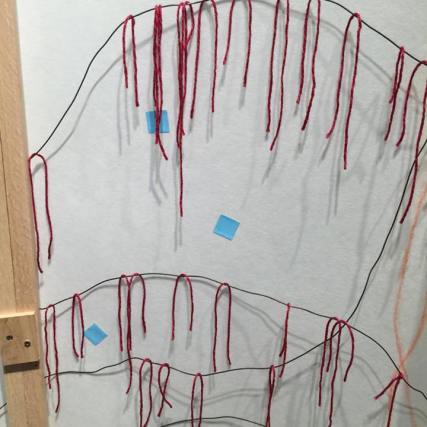 During my artist residency at the Santa Fe Art Institute, I learned that the history of the New Mexico internment camps was not well known, and people wanted to know more.

My focus became, how could art bring understanding and connection to the communities in Santa Fe?  I wanted to inform the public about this history that has touched my own Japanese American family and invite people of other cultures to express their stories of displacement, unjust incarceration, and immigration journeys.

I decided to create an experiential space incorporating modalities like drawing, movement, speaking, listening, and re-enactment.

Participants were invited to create a presence for those they wanted to remember. Just the simple task of striking a pose of a loved one and being outlined in red crayon, connected the collaborators, and spontaneous memories were shared. These ancestor drawings on the gallery walls created a safe and sacred place for remembering.

It was a very moving event with many voices, quiet support, some tears, and an overall powerful energy of compassion. People traveled from as far away as Taos, Las Vegas, and Albuquerque to attend. The walking meditation lead by Eliane Allegre with the music provided by Glen Neff put the participants in a contemplative space to consider stories of incarceration, immigration, and displacement. 15 storytellers came forward to share internee memories and other difficult and heartfelt experiences.

The gallery event was followed by the visit to the Santa Fe Internment Marker. It was chilly, windy and clear beautiful day. We carried symbolic suitcases, like the prisoners traveling to a place unknown. Upon arriving the cases were opened and the folded cranes and flowers inside were used to embellish the marker. Historian and writer Nancy Bartlit and Victor Yamada of the NM Japanese Citizen League, spoke about the marker history and future plans to bring more visibility to the history of the New Mexican Internment Camps.

You may ask, why is it important to share this history from 73 years ago? In the United States today, we are still imprisoning innocent families, like those from Central America. In a world of terrorist atrocities, the backlash of racial and ethnic prejudice is rampant. We must find ways to understand and connect to each other and art is a powerful way to do it.

Thank you to all of you who supported this special sharing event. It couldn’t have happened without the team of Victor Yamada, Sue Rundstrom, Nancy Bartlit, Santa Fe Art Institute, Glen Neff, Eliane Allegre, and many others.

Thank you to the Santa Fe Art Institute for selecting me for the immigration artist in residence program.

Sometimes it gets to me – working with the deep and wounded history of my ancestors. Today I had a good breakfast conversation with a friend. She understands the work I am doing about the Japanese Internment Camps in New Mexico at the Santa Fe Art Institute. She’s lived here in New Mexico long enough to know that there is rich tapestry of different cultures and communities and that makes researching and making art about the history of the camps even more complicated. Peeling the layers back can be raw, and seeing the crisscrossing histories of: the vets who were in the Bhataan death march and experienced the brutality of the Japanese army, the injustice of the American concentration camps imprisoning innocent people of Japanese ancestry, and the Los Alamos creation of the bomb that killed so many in Hiroshima and Nagasaki. I’m wrapping my head around it after a month of research.

My friend said, “you are a flag bearer who makes sure people know the history so things don’t happen again.” Yet I find it so discouraging to see the Central American immigrant families being imprisoned right now.

Keeping my heart open is what sustains me. I hope to bring light and witnessing to stories of injustice and imprisonment for all kinds of people. My ritual performance will invite anyone to participate. More info to come soon. 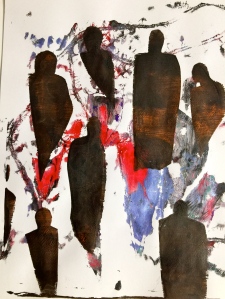 Injustice and disbelief. Those are the words that come to mind as I’ve been working on my SFAI (Santa Fe Art Institute) art residency. I’ve been researching for two weeks the forced immigration of people of Japanese ancestry to the Santa Fe Concentration Camp. 4,555 men came through this prison and none of them had been charged with any wrong doing except that they had the face of the enemy. Even though I’ve made art on the subject of the Japanese American Concentration Camps over the years, it still hits me hard that in America such injustice and racism existed and unfortunately still does. How can America justify putting 120,000 innocents from babies to grandparents in prisons for 4 years? How can police kill people of color over and over? How can Guantanamo still exist?

A community engagement project is bubbling, forming, rising….to embrace them, to remember them, to teach about them, to acknowledge all peoples’ stories of injustice.

New Santa Fean friend Sue Rundstrom invited me to the Art and Remembrance presentation at the Museum of International Folk Art. Bernice Steinhardt movingly presented her mother, Esther Nisenthal Krinitz’s story of escaping the Nazis at the age of 15. Esther at 65, began creating fabric collage and embroidered art pieces, telling her history. Through film and photographs, we were able to connect and understand her resilience and courage.

Steinhardt facilitates a collaborative story cloth workshop. Below are some works by adults in an English education program.

I guess it is common to see your own art differently after it is up on the gallery walls. Stepping back to take some photos, I suddenly realized that all three pieces in the Generation Nexus: Peace in the Post-war Era Exhibition, were about my father, Kazumi Shintani.

I should not have been surprised since the exhibition is about victims of the US government’s concentration and confinement policies. The show is curated by Betty Nobue Kano and Janeen Antoine, who brought together artists of Japanese American and Native American heritage – Muriel Antoine, Fredrick Cloyd, Lucien Kubo, Emmanuel Montoya, Ruth Okimoto, Judy Shintani, Anthony Sul, and Hulleah Tsinhinjinne.

The exhibition is in the new historical Building 640 in the Presidio in San Francisco. The building was a secret Military Intelligence Service Learning Center, where Japanese American Soldiers were trained as military linguists in 1941, for the coming war.

I describe my work in this blog but decided to not show all of them, to just give you just a taste of what is in the show.

Portal The photo of my father, Kazumi Shintani, was taken in a farm field near the Tule Lake Segregation Center in Northern California. He spent his teenage years imprisoned there. At the time of the photo we had just concluded attending the Tule Lake Pilgrimage. It was the first time I visited this historic place that is so important to my family history and that of many other Japanese Americans too. The Pilgrimage was a time of healing, reflection, story telling, and acknowledgement for us and the other 300 attendees. In the photo my father is looking at a dilapidated barrack that originally was a home for some internees at the camp. The barracks were later removed and sold to returning vets to use for homes and barns. The wood from this barrack was offered to internee families before it was to be burned. My father and I scavenged some material for my future art making. It was a way to take a piece of painful history and transform it. 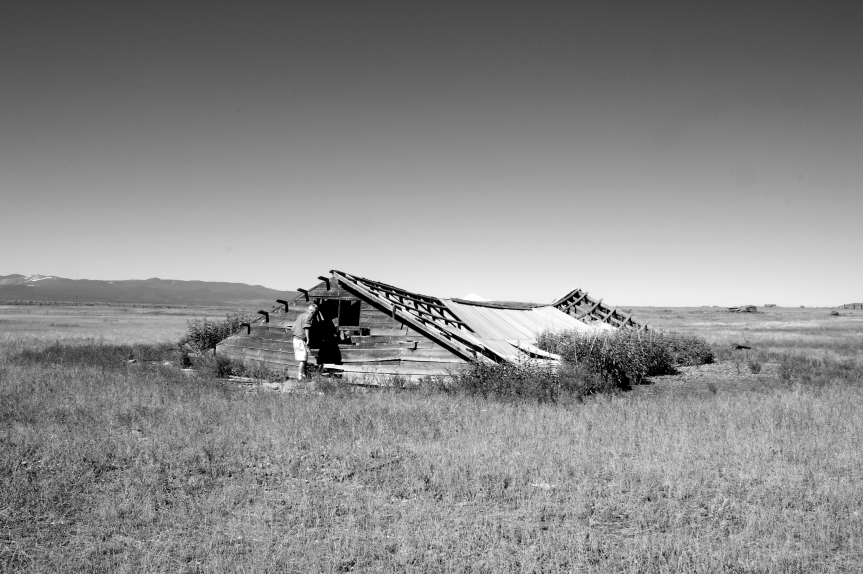 Pledge Allegiance The Tule Lake barrack wood represented a time when my father was imprisoned during his teenage years. I held on to the wood for 3 years. After much pondering, sketching and soul-searching, I decided to create an American flag. The pledge of allegiance phrase “with liberty and justice for all” rang hallow during the 1940’s when the US government forced the unconstitutional imprisonment of 120,000 men, women and children of Japanese ancestry into ten concentration camps. Tule Lake camp became a segregation and high security camp for internees who were labeled disloyal.

Currently many Japanese Americans, as well as other Americans, are alarmed about the state of citizen freedoms and racial profiling that is happening in the United States. It is an important time to stand up for our rights and make sure that history does not repeat itself.

Ancestor Chimes My father’s family settled in America and raised oysters in the Puget Sound. In this piece I honor these family members, most of who have passed on. On the oyster shells you will find their stories. Some of the ink may fade over time just as memories do. The shells dangle and move and our legacy travels to reach ancestors via the wind and the sound of bells. I imagine they are pleased to be reminded of the beautiful place they once inhabited. Their livelihood and time in Washington was cut short when they were unjustly forced to move out of the area due to their ethnicity and the war. They spent 4 years in the Tule Lake Concentration Camp. 65+ years later my father recalls happy times of living on a houseboat in Washington and enjoys bringing his children to visit his childhood locale.